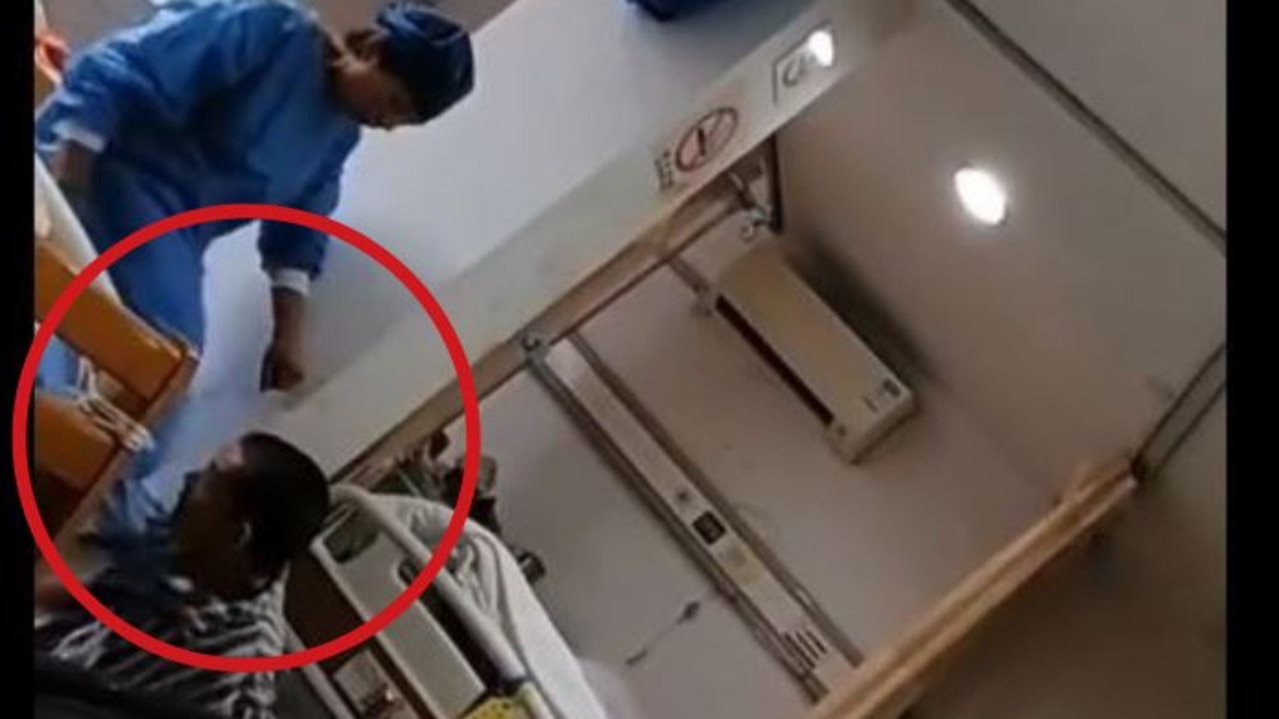 A sickening new video out of locked-down Shanghai has exposed the grim reality of China’s escalating Covid-19 nightmare.

A confronting video from Shanghai has laid bare China’s growing Covid crisis, as millions remain locked down for weeks on end.

The clip, which was recorded in a Chinese hospital recently, captures the horrific moment a female nurse kicks, berates and later hits an elderly patient as he kneels helplessly on the ground.

It was shared on Twitter by user @thameslion, who claimed the incident may have occurred at the Bund Street Community Hospital in the Huangpu District in Shanghai.

The video, which appears to have been taken by another patient in the ward, has attracted fierce backlash from Chinese citizens, with one claiming the hospital’s reputation has been “fed to the dogs” as a result.

The nurse has since been suspended, with health authorities claiming in a statement that they “attached great importance to the incident and quickly formed a team to investigate the situation”.

The statement also added that police had launched a separate investigation.

However, as disturbing as the attack is, many have interpreted it as merely a symptom of a far larger crisis, as China’s draconian Covid-zero policy well and truly begins to sour.

Shanghai’s 25 million-odd residents have struggled through six weeks of brutal lockdown rules – and the pain looks likely to continue for weeks ahead, as the city reels from the biggest outbreak since the start of the pandemic in 2019.

According to Chinese Communist Party mouthpiece the Global Times, authorities are preparing to finally ease restrictions in China’s largest city by the end of May – although many tough rules will likely remain in place for the foreseeable future.

Under the current rules, more than 2.3 million residents are in full lockdown, with more than 16 million living in “precaution-level regions” forced to observe harsh restrictions such as allowing just one person per household to leave the home to purchase necessities in certain areas only.

After being largely trapped inside their homes or workplaces since March 28, and with Covid-positive people forced to move into overcrowded mass quarantine centres, discontent among everyday citizens is growing, with many left frustrated by China’s aggressive pursuit of a Covid-free status as most of the world learns to live with Covid.

Last month, reports began to emerge of households running out of food as supply chains took a lockdown-fuelled hit, while many also went without crucial medical care.

In a relatively unprecedented move, audio of Shanghai residents describing their struggles also went viral in a video known as Voices of April, sparking yet more backlash as well as some protests – an extremely rare event in tightly-controlled Chinese society.

And it’s not just Shanghai that’s suffering, with full or partial lockdowns in full swing in Beijing and 42 other cities, causing logistic nightmares not only in China, but across the planet.

Xi doubles down on Covid ‘war’

Despite escalating signs of discontent within the population, Chinese President Xi Jinping continues to double down on his Covid elimination strategy, recently reiterating that “persistence is victory” when it comes to the “war” against Omicron.

“Our policy can stand the test of history, and our measures are scientific and effective,” the Committee said.

But Mr Xi’s stubborn policy could cause significant problems down the track, with the economic impacts of lengthy lockdowns already starting to bite.

Chinese Premier Li Keqiang last week warned of a “complicated and grave” jobs situation as a result of lockdowns, after China’s unemployment rate rose to 5.8 per cent in March – the highest since May 2020.

“I am not saying that they should abandon this strategy immediately, but it’s time to reassess the strategy and make the change at some point,” Dr Xia told the agency.

“A sensible transition plan will strike a good balance between saving lives and maintaining economic prosperity.”

But as Deng Yuwen, a former editor of a Communist Party newspaper, recently told Bloomberg, Mr Xi’s Covid-zero commitment won’t change any time soon as he fears a devastating Covid death toll would be blamed on authorities, leaving his leadership exposed.

“Covid prevention has become a fight that Mr Xi cannot afford to lose,” he said.