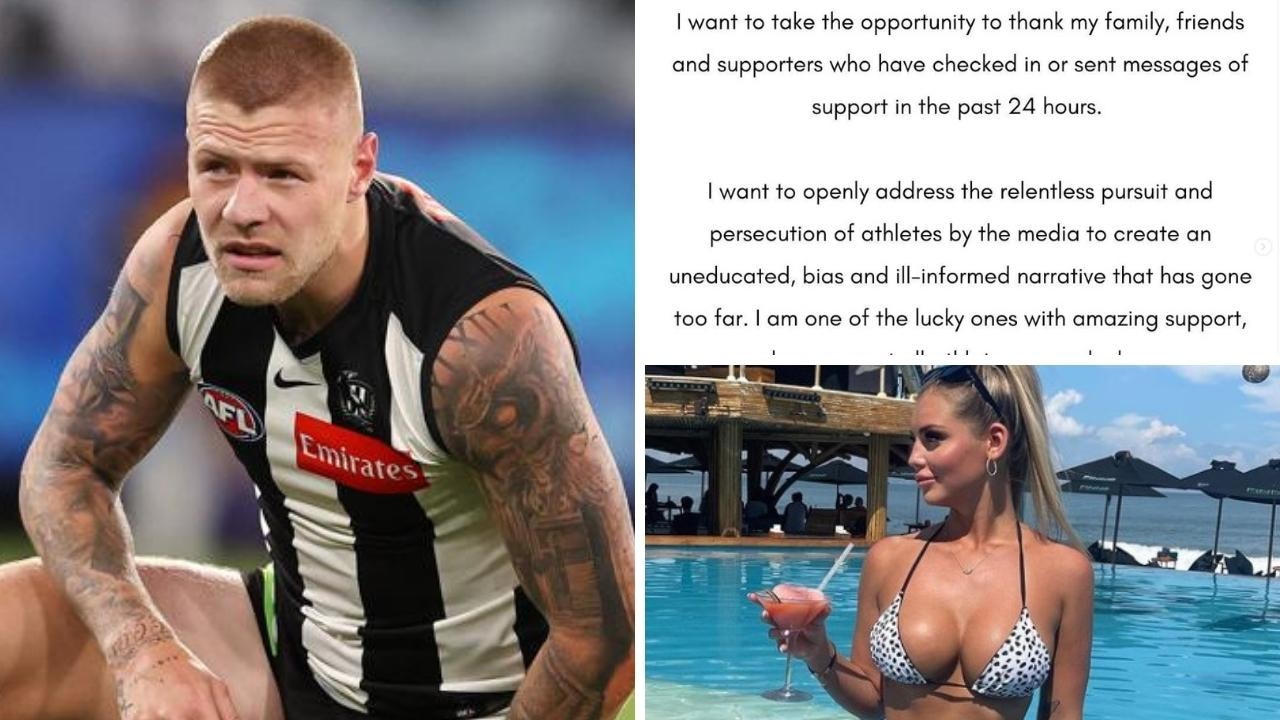 AFL star Jordan De Goey has hit out at the “persecution of athletes” as his Bali nightclub video scandal took another dramatic turn.

Jordan De Goey has posted a statement on Instagram slamming media outlets for “the relentless pursuit and persecution of athletes”.

The Collingwood star is at the centre of another off-field scandal after he was seen tugging at a woman’s top in a video posted to Instagram.

Shocking video footage of the 26-year-old partying in Bali spread across the internet like wildfire and has put the Collingwood star well and truly on the hot seat with AFL legends and pundits blasting the star’s midseason antics.

On Saturday afternoon the woman in the videos, Remy Jackson, spoke out about the backlash and threw her support behind De Goey.

“Hey everyone, I can’t believe the backlash towards Jordy and myself over here in Bali … nothing to see here,” Jackson posted on her Instagram story.

De Goey on Saturday night also made public comment with a brief statement posted on his Instagram page where he said media outlets had gone “too far”.

“I want to take the opportunity to thank my family, friends and supporters who have checked in or sent messages of support in the past 24 hours,” he wrote.

“I want to openly address the relentless pursuit and persecution of athletes by the media to create an uneducated, bias and ill-informed narrative that has gone too far.

“I am one of the lucky ones with amazing support, however not all athletes are so lucky.

“This will end in tragedy if no one speaks up.

Collingwood released a statement on Saturday morning, stating they would be looking into the videos further.

“The Collingwood Football Club is aware of video footage involving player Jordan De Goey that was taken in Bali in recent days. The Club will comment further as soon as it is in a position to do so,” the statement read.

One video posted on Instagram shows De Goey interacting with a mystery woman before she is seen batting him away after an apparent attempt to expose her breasts as she lay on a bar.

He is also seen making a crude gesture towards a person filming with a camera where he appears to mimic a sex act with his tongue and fingers.

In other content posted to Instagram, De Goey is also seen drinking while standing inside a pool alongside other men and women.

De Goey has copped scathing criticism from all corners of the football industry since the videos of him partying in Bali came to light.

The incident comes after he was in March fined $10,000 by the AFL for his involvement in a late-night incident in New York last year.

He pleaded guilty to a downgraded charge of harassment in the second degree having first pleaded not guilty to charges of assault and harassment. Charges of forcible touching were also dropped.

De Goey is expected back at the club on Monday.