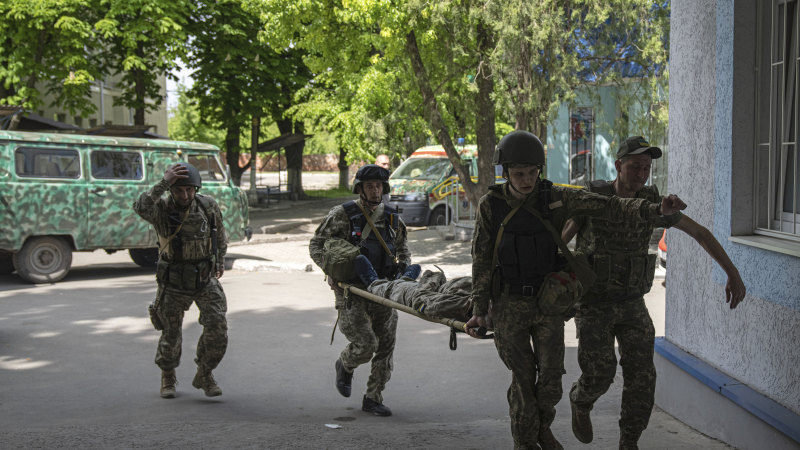 Paslawsky said the need for medical supplies was growing because people with chronic disease could not get basic medication in parts of Ukraine, in addition to the help needed for those wounded in the conflict.

“We are forever grateful for the generosity, support and kindness provided by so many individuals and organisations across Australia,” she said.

Prime Minister Anthony Albanese said on Friday he was considering an invitation from Ukrainian President Volodymyr Zelensky to visit Kyiv.

Governments have pledged €85 billion ($128 billion) to Ukraine since January 24 and half of this has come from the United States, according to the Ukraine Support Tracker developed by the Kiel Institute for the World Economy in Germany and updated on June 16.

But distribution is a significant barrier.

“Only about 17 per cent of financial commitments have actually been disbursed to Ukraine. Moreover, some countries, like Germany or the US, have delivered less than half of the weapons they committed,” the report said.

In addition to the 20 Bushmasters already sent, Australia has promised a further 20 vehicles as well as 14 armoured personnel carriers.

When the Kiel analysts added up all government commitments – financial, military and humanitarian – they ranked Australia at 15 on a table of 38 countries, behind Greece and ahead of Latvia.

Another recent report on aid to Ukraine found that the “organic” humanitarian work by local volunteers had done more than global aid organisations, highlighting the need for local networks like those set up by Paslawsky to deliver medical supplies.

“For the first six weeks post-invasion, virtually all humanitarian aid inside Ukraine was organised and implemented by local actors,” said the June report by the United Kingdom Humanitarian Innovation Hub.

“Volunteer groups have sprung up across the country, and especially in areas where fighting has caused dislocation and disruption of daily life.

“Typically, a small group of friends and associates begins work by pooling its own money and other resources, such as vehicles and relevant know-how, and responds to needs it sees in its immediate community for household and shelter items.”

Romaniw said he hoped Albanese would go to Kyiv to show support for Zelensky and Ukraine.

“There are two basic messages: don’t fall into Ukraine fatigue and, secondly, keep giving us the weapons we need. To quote Winston Churchill, give us the weapons and we’ll do the job,” he said.

“People don’t quite appreciate the importance of Australia. If Albanese was in Kyiv it would be a huge statement – that someone from thousands of kilometres away had come to support us.”