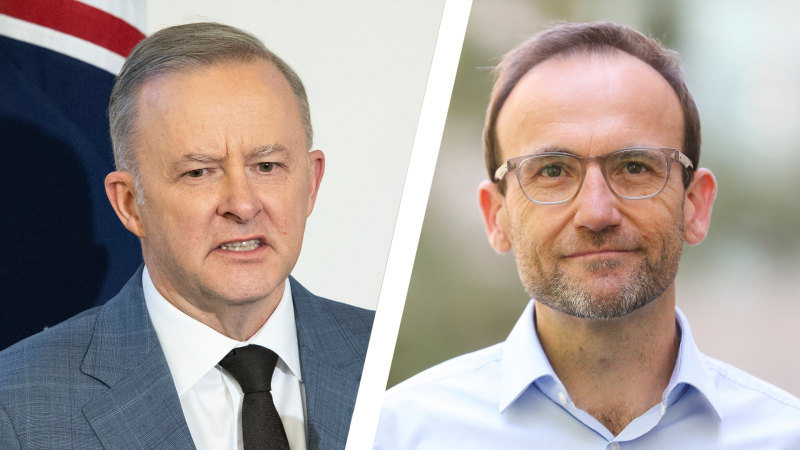 Responding to the earlier draft, Bandt had demanded the Labor government “Dutton-proof” the targets against any future government’s plans to wind them back, calling for commitments to raise the ambitions to be written into the laws.

Climate Change and Energy Minister Chris Bowen on Monday signalled the government was moving to make clear its legislated target would set the floor for the government’s climate ambition.

“The bill makes it clear that 43 per cent is our minimum commitment – and does not prevent our collective efforts delivering even stronger reductions over the coming decade,” he said.

Bowen said enshrining the target in law would “end the climate wars” and would be crucial in creating certainty for business and investors, who are needed to bankroll hundreds of billions of dollars of new infrastructure and technology to shift to a low-emissions economy.

He said Labor has been given an election mandate to stick to its 43 per cent target, arguing that increasing that target shortly after the poll would erode investor confidence.

“We went to the election promising to reduce emissions by 43 per cent by 2030, we were given a mandate and now we are delivering,” Bowen said on Monday.

“This bill confirms our commitment to ambitious but realistic targets supported by Australia’s states and territories, business, industry, unions, environmental and community groups – and provides a platform for collaboration to drive down emissions while ensuring reliable energy supplies”.

Labor made an election promise to enshrine its target to cut greenhouse emissions 43 per cent by 2030 based on 2005 levels and the government will depend on the Greens’ votes in the Senate to pass its legislation, as the Coalition has indicated it will oppose the targets.

Labor’s bill is expected to come before the lower house on Wednesday where Labor has enough votes to pass it on its own. The bill is set to reach the Senate by September and because the Coalition has vowed to vote against the draft laws, Labor will need all 12 votes from the Greens plus one crossbencher, which will most likely come from ACT independent David Pocock who is open to Labor’s proposal.

Another change proposed by Labor would also insert the new emissions target into the objectives and functions of key agencies such as CSIRO, the Clean Energy Finance Corporation, Infrastructure Australia and the Australian Renewable Energy Agency.

Even if the Greens and the Coalition decide to block Labor’s bill, Labor can deliver its key measures to cut carbon emissions without new legislation by increasing renewable energy projects and capping industrial pollution.

The bill does not contain specific mechanisms to ratchet up emissions reductions, such as the use of existing safeguards mechanism to force tougher carbon pollution caps on the 215 biggest industrial polluters in the country.

Despite its shortcomings in the Greens eyes, the bill presents a dilemma for the minor party as it revives memories of its role in blocking the Rudd government’s Carbon Pollution Reduction Scheme.

While the former Labor government was responsible for withdrawing the CPRS from parliament in 2010, the Greens have shouldered blame from some for helping to ignite Australia’s decade-long climate wars when they deemed the scheme inadequate and blocked the legislation.