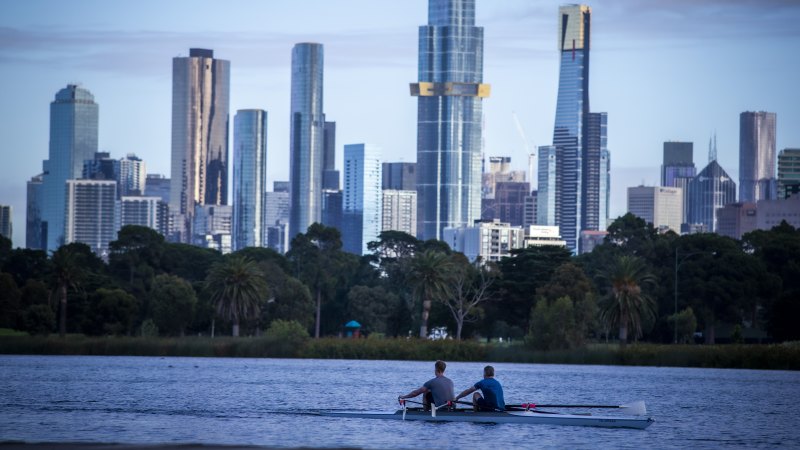 The same data, however, confirms that many residents from the nation’s two largest cities headed to regional centres or coastal locales including in other states.

While Melbourne lost residents, one of the fastest-growing parts of Australia was just outside the city’s boundaries. Warragul-Drouin, which sat beyond Melbourne’s “ring of steel” through COVID-19, added 1651 residents, swelling the population by 4 per cent.

Also outside the ring of steel was Geelong, which added 6114 residents, taking its overall population to 289,400. Nearby, coastal boltholes such as Lorne (382), Portarlington (584) and Torquay (1318) all gained residents.

Away from the coast, Ballarat added 2000 residents through the period while along the NSW-Victorian border, the population in both Albury-Wodonga (1281) and Echuca-Moama (399) increased.

It was a similar situation in NSW. Newcastle-Maitland added almost 7500 residents through the 12 months, taking the city’s population to more than 509,000. To the south of Sydney, Wollongong added 1781 residents while the Central Coast’s population increased by 1349.

CommSec chief equities economist Craig James said it appeared people who had long thought of leaving the nation’s capital cities for a better lifestyle in the regions or on the coast had bitten the bullet during COVID-19.

Attractive regional centres such as Geelong, the Gold Coast and the Sunshine Coast had all benefited from the change in mindset brought on by the pandemic.

“People have ummed and ahhed about making the shift. Now with COVID, push has come to shove and they’ve done it,” he said.

James said the advent of technology such as Microsoft Teams or Zoom had been a critical factor in allowing people to make the shift out of their CBD offices.

He said it was unclear how much longer this shift out of the cities would continue.

“Businesses are keen to get people back, so you might see people making that trip back into the office for two or three days in the week,” he said.

Recent research by the Regional Australia Institute and the Commonwealth Bank found young people were moving in increasing numbers out of the major cities.

The ABS data showed a lift in some mining centres, with the West Australian mining hub of Port Hedland increasing its population by 3 per cent in the period. In nearby Karratha, the population increased through 2021 and is now almost back to where it was before the end of the mining construction boom in 2013.

But lifestyle centres also dragged in people. Across Queensland, both the Sunshine Coast (an extra 5869 residents), the Gold Coast (6744) and Yeppoon (439) all recorded larges increases.