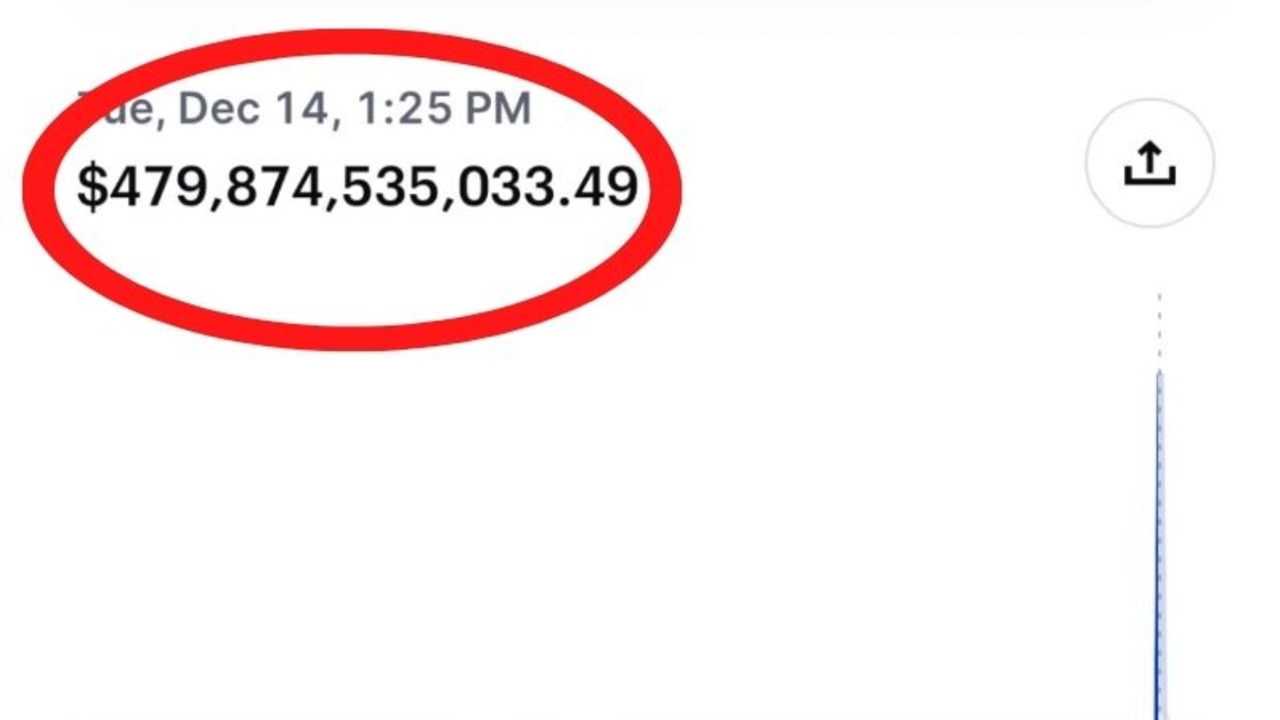 Thousands of cryptocurrency users woke up thinking today was the day, scurrying to cash out after a popular app short circuited.

Thousands of cryptocurrency investors awoke to a shock today after checking their portfolios on Coinbase, briefly being led to believe their hobby investments had finally paid off big time.

Prices were appearing to rise millions of per cent or fall by tens of thousands instantly in the brief window of chaos, sparking a Twitter storm among the crypto community.

Investor Leon Paul shared a screenshot of his particular glitch, showing his portfolio rise from $36 to $55 million in an immediate spike. Podcaster Chris Messina also shared his account’s dramatic surge with the website, claiming he was sitting on $479 billion dollars.

Much to the ire of customers, the inflated assets weren’t able to be withdrawn as real dollars, but that didn’t stop a few jokesters from claiming they were already out “yacht hunting” after “cashing out”.

Coinbase acknowledged on Twitter that some of its customers were seeing extremely inflated values as screenshots of the conundrum flooded social media.

“We’re aware some customers are seeing inflated values for non-tradeable crypto assets on Coinbase. This is a display issue only and does not impact trading,” the trading website posted, confirming “the display issue has been resolved” around 10am AEDT.

“Apologies for any confusion – we‘re still investigating asset price and trade difficulties. Non-tradeable assets on Coinbase are no longer appearing inflated, and assets on Coinbase Wallet should reflect the correct market value.

The issue came one week after a number of Coinbase users launched a campaign to force the company to issue refunds after a glitch reportedly locked them out of their accounts and preventing them trading and withdrawing assets for weeks on end.

Coinbase has also announced it will be bringing NFTs to its desktop browser, offering users a new option to access their non-fungible tokens (NFTs) associated with their specific wallet address.

In other cryptocurrency news, Dogecoin has seen yet another resurgence after Elon Musk announced Tesla would be accepting the meme currency as payment.

The billionaire’s comments immediately sent the asset soaring by 33 per cent in just two hours.

Musk recently came out in criticism of Coinbase after recent issues on the platform restricted customers from withdrawing Doge. Musk declared users “should be protected from errors that are not their fault”, especially in a market where a few hours can mean the difference between thousands of dollars in returns.

Despite the latest bump in the road, official cryptocurrency prices rose steadily on Tuesday. with Bitcoin increasing by 2.56 per cent and dogecoin jump up another 17.03 per cent.