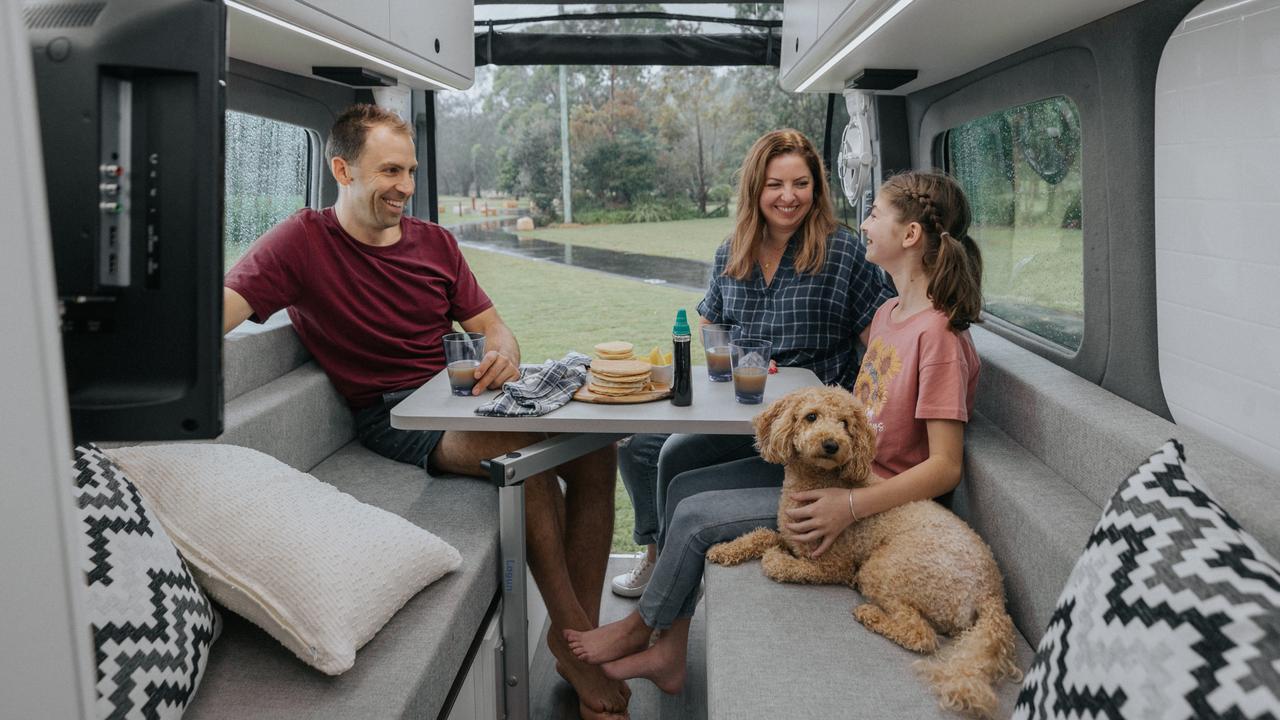 The legendary Kombi spirit is alive in a plush new outback explorer that has been specially made by Australians for the local market.

Dubbed the Crafter Kampervan, it’s a collaboration between VW and Australian company Jayco. The new model joins the smaller Caddy California and Multivan California in the German brand’s local line-up.

Volkswagen has a factory-based Crafter van available in Europe, but the local arm is unable to bring it Down Under because it doesn’t meet Australian Design Rules.

Prices haven’t been confirmed for the three-tier model line-up consisting of standard Kampervan, Kampervan Style and Kampervan All-Terrain grades, but prices are likely to start about $135,000 and go north of $150,000.

There’s plenty of room for living inside the van, which measures 6.8 metres long and two metres wide.

The Crafter Kampervan packs in seating room for four, but only sleeps two adults and one small child. This is because customers have told Jayco and VW that larger kids usually sleep in a tent just outside.

It comes with all-wheel drive and a punchy twin-turbocharged 2.0-litre diesel engine that makes 130kW and 410Nm.

Generous fresh and grey water tanks are standard as are a two-cooker gas stove top, sink, fridge and a microwave.

A compact bathroom includes a shower and a toilet.

At the rear where the bench seats turn into a bed, there is a TV with a DVD player. A second battery and a 200 Watt solar system bring off-the-grid potential.

VW draws on its Kombi heritage with a two-tone paintjob.

Jayco says all materials and cabinets in the fit-out are produced and installed locally.

The Kampervan has been tuned for Australian conditions after undergoing extensive testing at the Anglesea Proving Ground in Victoria.

Initially only 120 examples will be built this year at Jayco’s sprawling Dandenong South facility, but the door is open for more in future years according to Ryan Davies, Volkswagen Commercial Vehicles’ Australian brand director.

“We want to dip our toe in the water and see how we go first, we can scale up but at the moment it is difficult because of supply constraints,” says Davies.

“We love the fact we can create jobs and opportunities in Australia. Through the Jayco project we’ll build 120 vehicles, maybe more.”

Jayco Motorised Division national sales manager Bruce Astbury says: “Jayco is proud to be associated with Volkswagen and the touring lifestyle that both brands embody.”

“This is a partnership that will enhance the depth of the Volkswagen range and continue to support local employment,” he said.